Anthony Daniels and C-3PO: The Man In The Machine 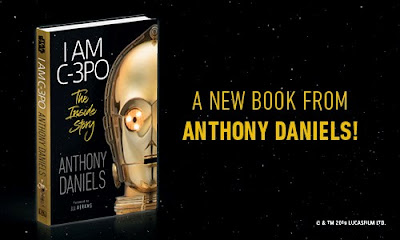 How else are you supposed to prepare for Episode 9? DK Publishing has a very exciting new title coming out this November, a little over a month before the third Star Wars trilogy is set to conclude, and it is written by a droid who's been there since the beginning. Anthony Daniels is the man behind the lovable golden visage that is C-3PO: companion to Luke, translator to R2-D2, made animate by the yet-to-be sinister Young Anakin in Episode One...no, maybe we should forget about Episode One. Except Darth Maul; oh, and Liam Neeson's ponytail.

Anyways, Mr. Daniels' autobiography, I AM C-3PO: The Inside Story (with a foreword by J.J. Abrams) jets from his first words onscreen - and the first words in the entire Star Wars franchise - to lifelong friendships with George Lucas, Harrison Ford, Carrie Fisher, and Mark Hamill, among others. What was it like, clumping around in that gold shell for twelve-hour day shoots? Was Anthony Daniels ever in danger? How'd he use the bathroom? Perhaps you'll find out, young Padawan!