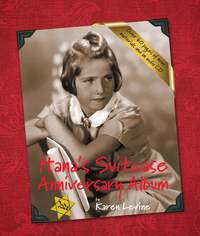 Today is Holocaust Remembrance Day. It is also the day that Hana's Suitcase Anniversary Album by Karen Levine will be launched celebrating ten years since it's publication. Hana's Suitcase has had an incredible life...it is the most awarded Canadian children's book in the past 30 years, has been translated into dozens of languages used by the UN in 100's of outposts and made into several films. The CBC did a feature on Hana Ten Years Later. The 10th Anniversary edition includes:
• Commemorative letters from Karen, Fumiko, and George
• Reaction from readers around the world
• Letters and art from children
• Photographs of events and ceremonies
• Scenes from the play adaptation
• Posters from the staging of the play in over ten countries
• Awards and Tributes – lists, emblems, photos, and quotable quotes from juries and the media
• Covers from the international editions
• Images from the documentary film
and much more.

Posted by Saffron Beckwith at 8:00 AM