Deborah Ellis to the Screen! 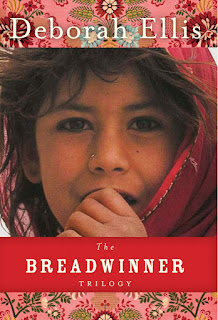 Revisit Deborah Ellis’ critically acclaimed and award winning The Breadwinner as the story of Parvana takes to the screen! Published in 39 editions since 2000, the film adaptation is due for release later this year. Directed by Nora Twomey, written by Anita Doran and Deborah Ellis, and produced by a team featuring Angelina Jolie- Check out the newly released trailer here!
Posted by Saffron Beckwith at 12:00 AM