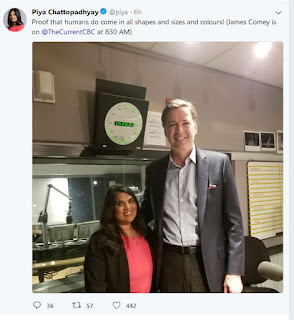 It’s been one year since former FBI director James Comey was fired. His recently-released book A Higher Loyalty discusses Comey’s career in the American government as well as ideas surrounding ethical leadership. In his interview with Piya Chattopadhyay on CBC’s The Current, Comey discusses the ways in which leadership should remain focused on truth, integrity and fairness; he also provides us with the one question we should ask before making a significant decision: "How would I explain this to my grandchildren?".

Listen to the interview here.

Posted by Saffron Beckwith at 2:00 AM