Big Nate is On a Roll!

Big Nate is back and better than ever! Big Nate On A Roll, the third book in this fun series that Kirkus likened to a 'latter-day Peanuts and a kinder, gentler Diary of a Wimpy Kid is now available in stores & on library shelves.

Nate has always looked forward to his Timber Scout meetings (even the berets are cool). But when the practically perfect foreign exchange student Artur joins his troop, Nate is going to have some serious competition to earn first place in the Timber Scout door-to-door sales competition. And Big Nate REALLY wants the customized skateboard that is the prize… Many laughs ensue as the competition heats up! With its mix of text and comic style panels, this book (and the others in the series) appeal to avid & reluctant readers alike. 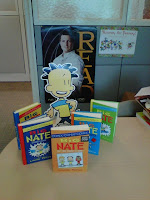 I must admit to having had a soft spot for Nate- I do like a mischief maker! So, to celebrate the release of Big Nate on A Roll, I’m running a contest for Canadian teachers & librarians. The winner will receive the prize pack depicted in the picture on the right, consisting of an autographed copy of the first two books in the series (Big Nate in A Class By Himself and Big Nate Strikes Again), as well as a copy of Big Nate on a Roll, Big Nate Boredom Busters, the newly arrived ARC of the new comic strip collection Big Nate: What Could Possibly Go Wrong? and a Big Nate cardboard standee.

To enter, please send me an e-mail at rosalyn.steele@harpercollins.com with the subject ‘Big Nate’. Be sure to include your full name and the mailing address of your library or school. I’ll collect entries until Friday September 2nd and contact the winner on Tuesday the 6th.