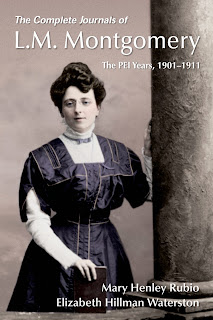 The Complete Journals of LM Montgomery, The PEI Years, 1901-1911 has just been released and it provides a fascinating look at Lucy Maude Montgomery’s life from her late 20s into her late 30s. The first entries describe her working life as a copyeditor in Halifax before she moved home to Cavendish, PEI to care for her recently widowed grandmother. Montgomery wrote her first novel, Anne of Green Gables, after returning to PEI and she also met her future husband during this time. The last few journals entries were written on her honeymoon when she was contemplating whether she had made the right choice. The journals also feature 300 b&w photos, most of them taken by Montgomery.