Woozles, an independent book and toy store located in the heart of downtown Halifax, is Canada's oldest children's bookstore, having just celebrated its 37th birthday.  If you haven't had the opportunity to go, it is an awesome experience! In addition to providing a carefully-curated selection of books for infants right up to older teens, Woozles runs book clubs for various ages and supports reading through programs such as our annual Battle of the Books.  Lisa is the Co-manager of the store, which means that in addition to numerous other things, she has the distinct pleasure of being one half of the team that makes the buying decisions for the store...a true labour of love!


Here are Lisa's fave books of the year: 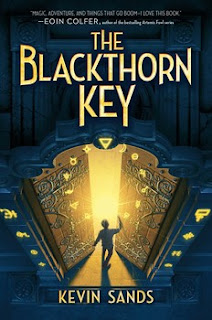 The Blackthorn Key by Kevin Sands
Christopher Rowe has a pretty perfect life serving as an apothecary’s assistant to the kind but firm Master Benedict Blackthorn who rescued him from the orphanage that had been his previous home.  Master Benedict encourages Christopher’s curiosity and challenges him to solve various puzzles and codes on a regular basis.  But when Master Benedict becomes the latest victim in a series of gruesome murders, it falls to Christopher to follow the clues that his master has cunningly left for him in order to find the killers.

In this, his first novel, Kevin Sands has crafted a satisfying and page-turning mystery that is also a rich and vivid historical fiction novel.  I loved the way in which he really captured the feel of the city (London) while also weaving in a wealth of information about the social and political machinations of the time period.  Most of all, though, Christopher himself is a thoroughly wonderful protagonist.  His relationship with his master as well as his friendship with Tom, the baker’s son, were beautifully rendered.  I truly enjoyed every aspect of this book and can’t wait to read the next book from this very talented writer.

Saint Anything by Sarah Dessen
When Sydney’s older brother is sentenced to serve time in prison for a drunk driving accident in which he seriously hurt a boy on a bicycle, her whole family is shaken to the core.  Now, more than ever, her parents’ lives revolve around Peyton.  And while her mother devotes herself completely to his plight, Sydney wonders if anyone in her family truly appreciates the enormity of what he has done, the irreparable damage he has caused.   Feeling like she must remain invisible, she is surprised when she meets Layla and her brother Mac, and the two of them readily absorb her into their circle of friends.  Suddenly Sydney finds herself connecting with a group of her peers who really see her for who she is.  But when Sydney disobeys her parents to help her new friends, her mother comes down on her with a heavy hand.  Will Sydney ever be able to convince her mother to really see her as someone with her own strengths and weaknesses rather than just in relation to her larger-than-life older brother?

Although those who know me might be tempted to roll their eyes and say “of course she would choose the new Sarah Dessen book”, I put a lot of thought into this selection.  Having read the book twice this past year, I can say that it really is one of my favourite reads of 2015.  It is certainly classic Sarah Dessen, in all the ways that I love.  The family dynamics that are explored are complicated and realistic.  I especially loved the way that Sydney came to see her brother in a new light, and the cautious new relationship that they began to develop.  I loved everything about Mac and Layla and their family…especially the bluegrass music.  They play the banjo!  I would have loved it for that alone!  But their familial relationships are also beautifully depicted.  And, as always, Dessen captures profound truths of every day life.  The relationship that develops between Mac and Sydney is sweet and satisfying but doesn’t overshadow the other aspects of the story.  She gets it so right in this book, which is both exactly what we’ve come to expect from Sarah Dessen and yet something entirely new as well.