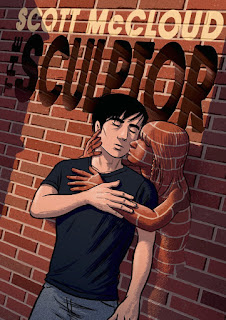 Scott McCloud – The Sculptor
Scott McCloud is perhaps best known for his 1993 masterpiece, Understanding Comics, a must-read for anyone getting serious about comics.
Clearly McCloud knows his way around the medium. But that book was largely technical. Understanding and appreciating the complexities and subtleties that go into a comic is not the same as being able to create one. Can McCloud pull off a fictional story, a creation of his own?
Without a doubt.
Impress over the technique behind The Sculptor all you want, but before long it will become impossible not to be caught up in the story.
The titular sculptor goes by the rather generic name of David Smith, who makes a deal with death.  For a few short months Smith will be able to sculpt anything, out of anything, with his bare hands. And then he will die. That, however, becomes complicated when he falls in love. Despite that, The Sculptor is not a love story…or at least, not simply a love story. It’s also a treatise about art; the business, the legacy, the meaning, and purpose of art. It's absolutely gorgeous. 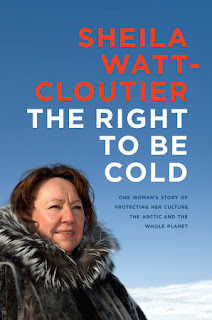 Sheila Watt-Cloutier – The Right to be Cold
Our library has Sheila Watt-Cloutier's The Right to be Cold classified in the biography section (which also includes autobiographies and memoirs). The title, however, suggests something different. It's "The Right to Be Cold," not, "My Right to Be Cold," after all.
So did my library catalogue it incorrectly? Perhaps it would better fit under ecology? Or perhaps philosophy? In the end, however, I think the classification is apt. Cloutier begins by describing her early life in Kuujjuaq, northern Quebec. And her own life very much remains at the center of the book. Sharing details about her residential school experience, her marriage, her father, and so forth, I wondered when she might get to "the right to be cold." She does, to be sure, but it's past the midway of the book. There's actually almost as much about her fight against POPs; the pesticides and other synthetic chemicals to wind up in the winds, making their way to Arctic and the food chain.
However, Watt-Cloutier does lead us, eventually, to the right to be cold and it's her arguments here that make me suspect none of this arrangement of details was haphazard. She rails against global warming campaigns that do not put a human face on the tragedy. Polar bears are usually at the center of such campaigns, with nary an Inuk in sight. By telling her own story, she submits herself, essentially as Exhibit A. You want to talk about change in the Arctic? You want to talk about how it affects people? Here she is.
But it also helps support her other argument: that we're all connected. Hers is a message of holistic health. As she gets her own life in order, taking care of herself spiritually, socially, physically, and so forth; as she reconciles her choices and her circumstances, seeks a greater understanding, all in an effort to become a complete human being, she advocates the same for the Earth and the human race. We cannot be a healthy planet without a healthy Arctic and we cannot be a healthy human race if we forget about the Inuit.
This is Watt-Cloutier’s life, but it’s also ours.

John is the Public Services Librarian at Yellowknife Public Library