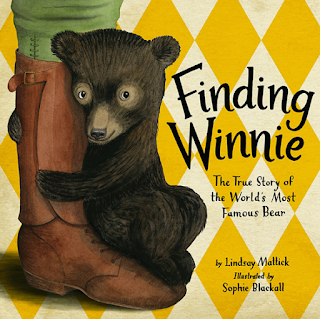 We've all seen the fantastic Historica Canada video on the Canadian roots of the bear the world has come to know as Winnie the Pooh from the book series by A.A. Milne. I don't know about you, but I've always wondered how the soldier from the video, Captain Harry Colebourn, came in possession of Winnie in the first place. Well, after reading the lovely picture book FINDING WINNIE, now I know!

Author Lindsay Mattick is the great grand-daughter of Captain Harry Colebourn, a veterinarian who enlisted in 1914 to care for the animals that were sent to serve the troops overseas in WWI. At one of the train stops en route from Manitoba to the training camp in Quebec, Harry bought a bear cub from a trapper. He named the bear Winnipeg (Winnie for short) and she became the mascot for the Second Canadian Infantry Brigade. Before deploying to France, Colebourn donated Winnie to the London Zoo for safekeeping.

"That's the end of Harry and Winnie's story," I said.
"But I don't want it to be over," said Cole.
"Sometimes", I said, "you have to let one story end so the next one can begin."
"How do you know when that will happen?"
"You don't," I said. "Which is why you should always carry on."

It was at the London Zoo that a young boy named Christopher Robin befriended the bear, a friendship that spawned the book series, and later, the Disney films we all know and love.

The book is plotted as a bedtime story that a mother is reading to her son, which she reveals at the end is not just a bedtime story, but rather to be a true family story. The last few pages of the book are set up like a family 'Album' featuring photos of Harry and Winnie and other ephemera.

Lindsay stopped by the HarperCollins offices in Toronto on Wednesday November 11th between media interviews for a meet and greet with our staff. She gave a very interesting talk about her family history, the process of writing the book, and the reasons why she wanted to share the story with a new generation of children, including her son Cole, who was named after his great-great-grandfather.

Do check out this beautiful and educational new picture book!

Want to read more?
-Rosalyn
Posted by Rosalyn at 12:00 AM