As the Buyer for Kelowna's Mosaic Books, in BC's Okanagan valley, there's no better way for me to spend a weekend than with a glass of wine in one hand and a book in the other. This year I've read a couple brilliant DEBUT novels by YOUNG, women novelists. 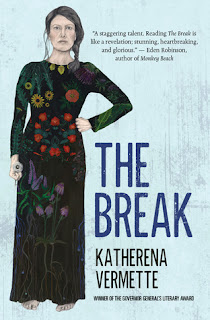 First, Winnipeg author Katherina Vermette previously won a Governor General's Award for her poetry collection, North End Love Songs. The Break is her fiction debut and was also nominated for both the GG's and Rogers Writers' Trust awards -
The Break - Katherina Vermette
The Break is a narrow field between two rows of houses in Winnipeg's North End where 13 yr old Metis youth, Emily is sexually assaulted on a freezing winter night. But she and her friends, mother, aunties and Kookum (Grandmother) do not break. They share and rage and heal each other. No one person can speak for an entire group but through telling these womens' story, author Katherina Vermette gives a face to the urgent crisis of violence against urban indigenous women. The women, and some of the men, are strong and wise and unflinchingly honest. They are so damn brave, facing unthinkable challenges with chins out, ready to take on the world. I don't know whether you have to have experienced trauma to be that strong, but I rather believe so. The novel is intense but there are moments of lightness and humour. This is such an impressive debut novel - best Canadian fiction I've read this year. If you liked Eden Robinson's Monkey Beach, you'll love The Break. 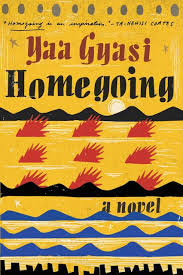 Yaa Gyasi is a Ghanaian born American. This is her debut novel.
Homegoing - Yaa Gyasi
300 years in 300 pages. Epic. Stunning. 26 yr old (yes, 26!) Yaa Gyasi follows the family lineage of two sisters - Esi is sent to America and Effia remains in Ghana. The early chapters are brutal. The family tree at the beginning of the book is invaluable since each chapter jumps forward a generation and alternates between continents.

Both sides experience trauma as a direct result of the legacy of the slave trade. "When someone does wrong, whether it is you or me, whether it is mother or father, whether it is the Gold Coast man or the white man, it is like a fisherman casting a net into the water. He keeps only the one or two fish that he needs to feed himself and puts the rest in the water, thinking that their lives will go back to normal. No one forgets that they were once captive, even if they are now free".

That being said, Gyasi doesn't portray her characters as victims and doesn't let them off the hook. What she does, brilliantly, is she gives each one a voice to tell their story. "We believe the one who has the power. He is the one who gets to write the story. So when you study history, you must ask yourself, Whose story am I missing? Whose voice was suppressed so that this voice could come forth? Once you've figured that out, you must find that story".