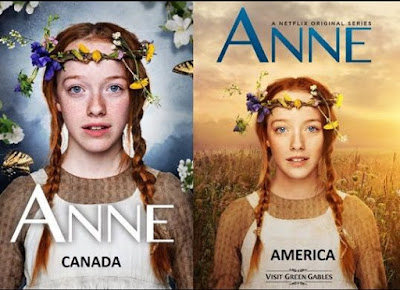 If you, like most of Canada, hold Anne of Green Gables near and dear to your heart, then you've probably given the new CBC/Netflix adaptation a try. While it's generally been welcomed with open arms, there is already some gentle controversy brewing in relation to Netflix's treatment of our beloved redhead in their promotional posters aimed at American audiences. While CBC's posters emit a more somber tone and reflects the freckly, day-dreamy, wistful orphan we know and love, Netflix has cast a golden light on Anne that not only doesn't really reflect the lonely feel of the show, but has magically dulled her freckles, changed the shape of her face, and reduced the slight blueness under her eyes. Read what Tirzah Price of Bookriot had to say about this interesting approach to the latest adaptation of PEI's sweetheart.
Posted by Saffron Beckwith at 12:00 AM