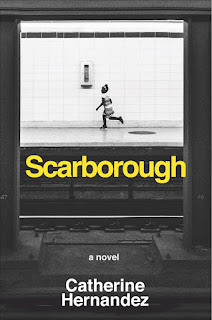 Catherine Hernandez's Scarborough has been shortlisted for the 2018 Trillium Book Award. Scarborough tells the story of this diverse Toronto neighbourhood through the eyes of several of its inhabitants. It was previously named winner of the Asian Canadian Writers' Workshop Emerging Writers Award in 2015 and was a finalist for the $50, 000 Half the World Global Literati Award for best unpublished manuscript in 2016.


Scarborough is also shortlisted for “One Book, One Brampton” by the Brampton Library (cast your vote here); the 2017 City of Toronto Book Award; and the 2018 Edmund White Award for Debut Fiction. It was longlisted for Canada Reads.

Read more at the Toronto Star or check out the other nominees here.
Posted by Saffron Beckwith at 12:00 AM