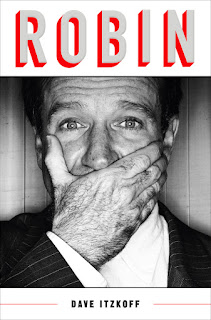 From Mork & Mindy, to Aladdin, to Mrs. Doubtfire, Robin Williams's career brought joy to many. His biography, written by New York Times culture reporter Dave Itzkoff, was released on May 15. In Robin, Itzkoff attempts to answer some of the lingering questions we have about the beloved entertainer following his death four years ago.

In his interview with Tom Power on CBC q, Itzkoff describes Williams as more subdued and thoughtful than the mania of some of his roles would suggest; he describes Williams as "empathetic" and "generous of self." Williams spoke openly about his battle with addiction and depression, either through his comedy or in interviews. Toward the end of his life, he was plagued by a debilitating condition, the effects of which never fully came to light until after his death.

Listen to the interview here.

Posted by Saffron Beckwith at 12:30 AM