Musings On Waterfowl in Fiction

I sometimes notice the oddest similarities in books that I have recommended. Looking back at my list of book picks from the past few years, I noticed that I had recommended not one, but three fiction books that feature waterfowl. In The Highly Effective Detective by Richard Yancey, the hit and run murders of a family of goslings crossing the road is bumbling PI Teddy Ruzak's first case. A Nameless Witch by A. Lee Martinez is a comedic fantasy novel in which a cursed undead witch sets out to avenge the murder of her mentor Gastly Edna. She is accompanied by her familiar- a demonic, wisecracking, and very bloodthirsty duck named Newt. Fly By Night by Francis Hardinge is a fantasy for readers Gr. 5 and up. The book features a girl named Mosca whose passion for words and reading leads her on an adventure in which she gets caught up in a political revolution. On her journey she is accompanied and protected by (you guessed it), her fierce pet goose.
So why the fascination with waterfowl? Who knows? Maybe I watched too many Donald Duck cartoons as a child! However, they seem to have noticed me noticing them! The photo below was taken when I left work late one night and had the oddest feeling of being watched as I crossed the parking lot to my car... 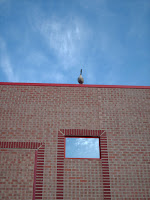