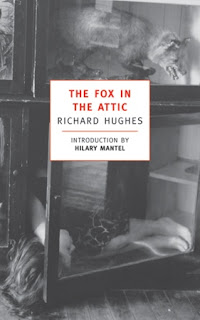 Richard Hughes is best known for his children's pirate adventure tale, A High Wind in Jamaica (also published by NYRB), but The Fox in the Attic is something quite different.

Conceived as the first part in a multi-volume project called "The Human Predicament", it follows the wanderings of Augustine, a young man in his twenties, heir to a large, empty house in a small Welsh town.  It's been five years since the end of the First World War (in which he was too young to fight), but this is not a Mitford or Fitzgerald type story of the jazz age.  Rather, it's a grim look at the lives of several characters - on both sides - struggling with personal tragedies against the still haunting echoes of the war.  The novel opens with Augustine carrying the body of a young six year old girl over his shoulder as if she were game. She has been found dead in the marshes, but by the time he gets her home, she's become something not unlike a corpse in a trench:

This had ceased to be "child" at all: it was total cadaver now. It had taken into its soft contours the exact mold of the shoulder over which it had been doubled and it had set like that - into a matrix of him.  If (which God forbid) he had put it on again it would have fitted.

To escape the village's implications that he might have had more to do with the child's death than just discovering the body, Augustine goes to visit distant German relatives living in a castle not too far from Munich, where he falls in love with his blind cousin Mitzi, distracting him from observing the political tensions swirling in the town.  During his visit, Hitler's failed putsch to seize power in Bavaria occurs, and Hughes devotes an interesting chapter to describing a few days in which an injured Hitler hides out at a friend's house before being captured.  He's not the only fugitive; strange noises are coming from the castle attic and not just from the fox that roams the corridors freely.

This is a rather disturbing book, full of meditations on the nature of self and self-consciousness, wrapped in a narrative of grief and almost hallucinatory madness at times. The very descriptions of the landscapes, whether in the bleak outdoors or in claustrophobic interiors, adds to the gloom and sense of menace that pervades the novel, even though there are a few comic, if macabre moments.  As such, it makes perhaps an interesting companion read to Bruce Duffy's The World As I Found It  (in fact G.E. Moore, or at least his philosophy, even makes an appearance).  It's both an eccentric and enthalling read where the fictional characters are juxtaposed against historical ones but equally distanced from each other so that it never feels contrived. It is very much a novel exploring individual isolation - physical, political, religious and philosophical. Hughes never finished his projected "Human Predicament" but there is a sequel - The Wooden Shepherdess - that continues Augustine's story and includes twelve chapters from what would have been the third book.  The Fox in the Attic reads just fine as a stand alone novel, but I'm intrigued enough both by the narrative and the prose style, that I'll definitely continue the journey.
Posted by Maylin at 2:27 PM