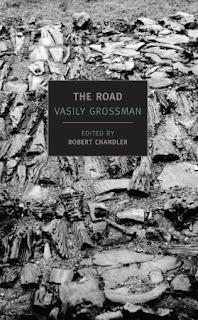 At the beginning of this challenge, I was determined not to read the same author more than once, but then I've broken so many of the guidelines I set out for myself, that I'm not bothered by one more. Simply put, I was completely blown away after reading Everything Flows earlier this year; when NYRB recently published Vasily Grossman's The Road, translated by Robert and Elizabeth Chandler and Olga Mukovnikova, I knew it was the book I wanted to end this challenge with.

As expected, this was a very powerful and sometimes difficult (in terms of content) read.  It's a collection of short stories, journalism, essays and two moving letters Grossman wrote to his dead mother on the anniversaries of the 1941 massacre at Berdichev, in which she died. The stories are worthy complements to his journalism being mostly about ordinary people and their reactions - often unexpected - to the horrors of war and living in an occupied town. Several of the stories are about finding a moment of human connection in extraordinarily sad and lonely circumstances.  Two stories try to see the world from an animal's point of view. "The Road" follows the painful experiences of a weary, abused mule, dragging his master's cart over endless, devastated roads during the Second World War. "The Dog" portrays the life of one of Russia's first animals sent into space.

But it is the journalistic pieces that stand out the most.  At the center of the book is the harrowing "The Hell of Treblinka", Grossman's description of what happened, step by step, detailed moment by horrific moment, to the thousands who disembarked the trains at this notorious death camp.  "The Sistine Madonna" ponders the effect of Raphael's painting, which "speaks of the joy of being alive on this earth" juxtaposed against all the wars and horrors that have occured since its creation. There is a reflective essay entitled "Eternal Rest" about people's relationships to cemetaries and the dead.  A passage from this piece sums up many of the themes in Grossman's work, and gives a sense of the complexities he continually finds and explores in human nature - at the best and worst of times:

Few close relationships are entirely clear and transparent; they are seldom - as it were - linear and single-story.
More often they are buildings with thick walls and deep cellars, with dark, stuffy little bedrooms, with all kinds of little outbuildings, with extra floors aded on top.
And there is no knowing all that goes on in these little rooms and cellars, in these little corridors and attics. There is no end to what has been seen adn heard by the walls of these incorporeal structures deep inside the human heart. They have seen clear light, merciless reproaches, eternal lust, satiety to the point of nausea, truth, the desperate wish to hae done with someone once and for all, year upon year of one trivial grievance after another and the need to account for every last kopek. They ahve seen terrible secret hatred. They have seen fights. They have seen blood being drawn. They have seen meekness.

NYRB and Robert Chandler have done a terrific job with this collection, assembling photographs of Grossman, useful introductions to each section which place the pieces in historical and biographical context, and providing detailed scholarly notes, follow-up appendices and even an afterword by Grossman's stepson. It's truly a great tribute to an unrelentingly brave and important writer.

And so, I've finally completed my 50 book NYRB challenge - a few months later than I'd hoped, but better late than never.  I'll assemble my thoughts on the process and list my top 10 favourites shortly.
Posted by Maylin at 11:30 AM